Yesterday, the Church of Satan released a so-called “fact sheet” related to The Satanic Temple. While I typically don’t reply to the insults and laughable claims of exclusive authenticity put forward by the CoS, this fact-sheet is so egregiously cherry-picked, willfully misinformed, and outright false, that it demands correction. Most of the “facts” on the fact sheet seem to suggest that the author believes that because The Satanic Temple (TST) began with lower ambitions, and that because TST wasn’t originally conceived to be a centrally governed international religious organization, it somehow still isn’t, and the original concept must still be the “real” TST.

In fact, we’ve been quite open in interviews regarding the origins of TST, and neither me nor TST’s other co-founder had the audacity to imagine in the beginning that TST could be what it is today. We wanted an active and relevant Satanism, one that would do exactly the things that TST are doing presently. We didn’t need an organization to tell us how to think, how to properly be “true” Satanists, or as a mere social club in which we could construct ourselves into the highest ranks of a false hierarchy. We wanted an organization that served a mission statement and pursued organizational goals. Of course, we didn’t have one, and the idea of constructing one from the ground up seemed a lofty delusion, but we had plenty of ideas of what such an organization would do.

Without membership and without any desire to recruit or convert, we imagined that we would demonstrate Satanic activism ourselves, putting small-scale campaigns to film, and that those films (or that film) would inspire others to fly the banner of The Satanic Temple and take up similar Satanic causes. The idea was that — with various competing concepts in Modern Satanism — TST would be a unifying umbrella without a central authority, that would be defined by its activism for secularism and against Satan Panic witch-hunts, for pluralism and against theocratic encroachments into the public square. We imagined TST would be more like Anonymous in its decentralized activities than anything resembling the international religious movement it’s become. But while TST changed, our deeply-held beliefs and identification as Satanists — which predated TST — never did.

END_OF_DOCUMENT_TOKEN_TO_BE_REPLACED 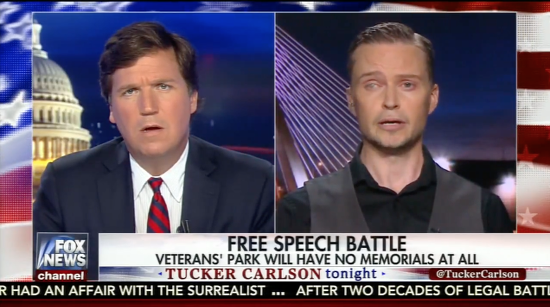 Anchor: … Lucien Greaves is the co-founder of the Satanic Temple and he joins us tonight.

Tucker: Lucien, thank you for joining us. Um, I don’t know much about Satanism. What i—What are the five pillars of Satanism? What is it?

Lucien: We have seven tenets, actually, and actually they’re irrelevant to our claim to be allowed in the Free Speech Zone. It’s a free speech issue—

END_OF_DOCUMENT_TOKEN_TO_BE_REPLACED 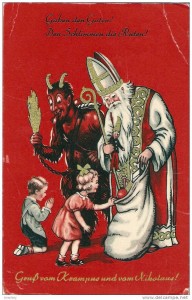 The “War on Christmas” — rather, the annual outbreak of hysterical persecution complex-driven conspiracy theories regarding secular/Satanic efforts to destroy a quintessential Christian holiday — must also be understood in this light. Surely, there are no serious efforts underway to prevent Christians from celebrating the holiday as they see fit. However, Bible-believing theocrats imagine their religious freedoms are being unconscionably abridged should they be in any way restricted from imposing their own interpretation of the holiday’s meaning, and their faith’s prescribed method of “celebration”, onto others. After all, ours is a “Christian Nation”, and preserving, proselytizing, and imposing Christian beliefs, are essential to the common Evangelical’s very practice of faith. END_OF_DOCUMENT_TOKEN_TO_BE_REPLACED 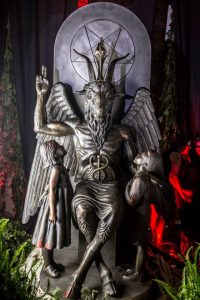 Tonight’s meeting began with three-minute public comments, which were kicked off by a citizen-veteran speaking desperately in defense of pluralism and free speech, followed by a tired and unconvincing Christian reading from the Book of Isaiah asserting that there is a Constitution “higher than the United States Constitution.” A fiery older lady then took the podium to declare that “Satanism is a not a religion; it’s a cult,” without ever defining either one. The Mayor interjected to insist that all testimony regarding the invocation controversy be withheld till the Council reached that particular item on the agenda. END_OF_DOCUMENT_TOKEN_TO_BE_REPLACED 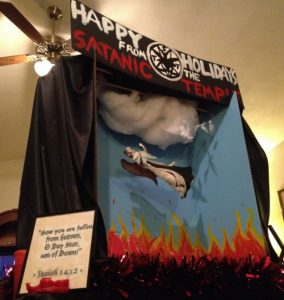 The display that has been approved this year is exactly the same display that was rejected as “grossly offensive” last year. Florida’s Department of Management Services declined to comment as to what, exactly, they judged to be “grossly offensive”, and we were left to conclude that we were being subjected to blatant viewpoint discrimination. This time around we arrived with a cadre of lawyers working with Americans United for the Separation of Church and State [AU]. This apparently rendered our homemade holiday display more palatable to the DMS’s tender sensibilities. In any case, the correct decision was finally made, and we appreciate the opportunity to publicly wish a happy holiday season to all. Nobody holds a monopoly upon the season’s celebratory spirit, and we hope that our display, among the various others, will contribute to a general and growing understanding of plurality. If there is fun to be had, we’ll have it — and we wish the same for all, regardless of religious affiliation, or lack thereof. END_OF_DOCUMENT_TOKEN_TO_BE_REPLACED

On December 30, we learned that the town council of Brookville, Indiana had voted unanimously to disallow a Nativity display that had, for the past 50 years, resided each holiday season on their county’s Courthouse lawn. This reaction was the result of a lawsuit filed by the ACLU on behalf of The Satanic Temple (TST) and the Freedom From Religion Foundation (FFRF). The county had rejected our own applications for putting up displays near the Nativity, prompting the legal action.

The suit was settled, as National Law Journal explained, “with the condition that Franklin County will allow local residents and churches to erect nonreligious displays outside the courthouse.” Groups like ours only needed a local contact to file for the permit.

It was a victory in the name of pluralism.

That’s why it was alarming when the Christian Post completely rejected the very facts of the lawsuit and its outcome, framing the entire affair as a defeat for the non-Christian side and The Satanic Temple in particular. END_OF_DOCUMENT_TOKEN_TO_BE_REPLACED

Originally published in The Los Angeles Times, May 05, 2014:

“Let us stand now, unbowed and unfettered by arcane doctrines born of fearful minds in darkened times. Let us embrace the Luciferian impulse to eat of the Tree of Knowledge and dissipate our blissful and comforting delusions of old. Let us demand that individuals be judged for their concrete actions, not their fealty to arbitrary social norms and illusory categorizations. Let us reason our solutions with agnosticism in all things, holding fast only to that which is demonstrably true. Let us stand firm against any and all arbitrary authority that threatens the personal sovereignty of One or All. That which will not bend must break, and that which can be destroyed by truth should never be spared its demise. It is Done. Hail Satan.” 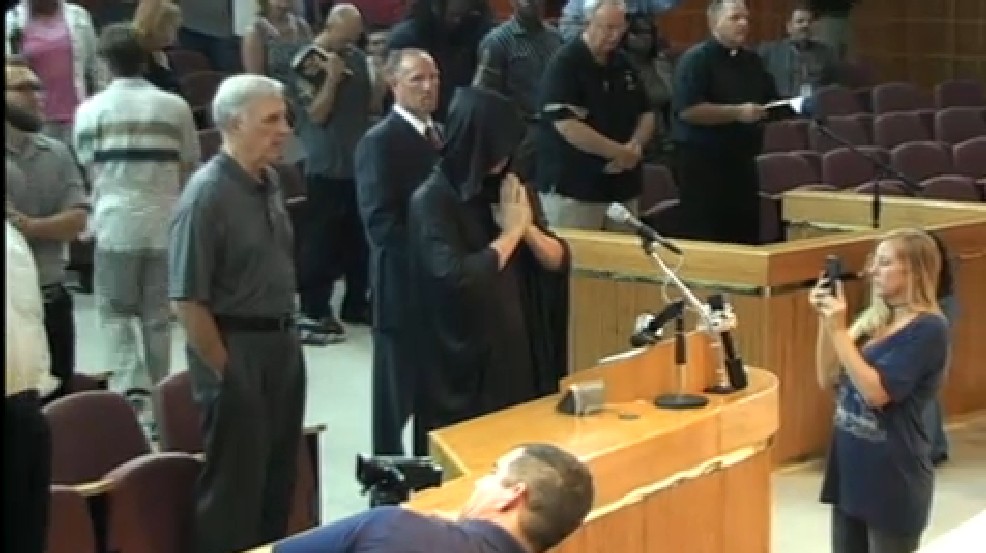 Yesterday, Nathan Phelps, the son of Westboro Baptist Church founder Fred Phelps, posted a note on Facebook claiming that his father is “on the edge of death at Midland Hospice house in Topeka, Kansas.” He also mentioned that Fred was excommunicated from the church in August of last year, but didn’t give any details as to why. Although the information at this point is sparse and unofficial, Westboro spokesman and Radiohead fanboy Steve Drain told the Daily News “Fred Phelps is having some health problems. He’s an old man and old people get health problems.”

In celebration of the icy hand of death caressing Fred’s gross old body, we reached out to Lucien Greaves, the leader of the Satanic Temple, who last summer performed a “Pink Mass” over the grave of Fred’s mother in order to turn her into a lesbian in the afterlife. When we spoke to him at that time, he told us, “Fred himself is getting pretty long in the tooth, and I hope to be presiding over his Pink Mass before long,” so yesterday we asked Lucien what he thought of the recent news of Fred’s demise, and if there are still plans to turn him gay after he dies. We have republished his response in full below. END_OF_DOCUMENT_TOKEN_TO_BE_REPLACED 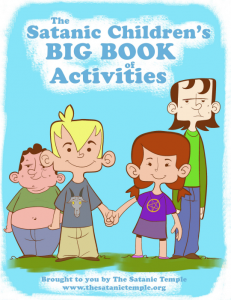 The story caught the attention of the national media, and during subsequent interviews I made certain points quite clear: END_OF_DOCUMENT_TOKEN_TO_BE_REPLACED