“Never Let Your Activism Be Artless”: An Interview With Lucien Greaves of The Satanic Temple by Haute Macabre: http://hautemacabre.com/2017/06/never-let-your-activism-be-artless-an-interview-with-lucien-greaves-of-the-satanic-temple/Haute Macabre:

Pacific Standard Magazine: Satan Has No Interest in Molesting Your Kids (October 25, 2016)

Education Week: What’s the Deal With the After School Satan Club Movement? (October 21, 2016)

Some people will be put off by Satanism no matter how it is practiced, and we do not feel compelled to “appease” them. We are not apologetic for who we are. What we can do, however, is educate people so that they fear us for the right reasons.

We threaten to overturn a misguided sense of religious exceptionalism that has plagued the United States for a very long time. We promise to engage actively in political/cultural dialogues and re-assert religious pluralism. People who fear a challenge to the Judeo-Christian religiopolitical monopoly are correct to fear us. We assert that religion, at its best, is a narrative construct by which practitioners contextualize their lives. We believe that religious narrative should be malleable to conform to the best scientific evidence. We reject supernaturalism and strive to approach all things with reasonable agnosticism. Charlatans, mystic snake-oil salespeople, cults, pseudoscientists, witch-hunting conspiracists, and the like all are correct to fear us. We will be merciless in our debunking and discrediting of their exploitative practices. We will assert the rights of religious non-believers everywhere, and those who hold pious and pompous positions of arbitrary authority based on superstition and/or pseudoscience are wise to view us as a distinct threat.

Beliefnet: Inside The Satanic Temple; an interview with Lucien Greaves (September 19, 2016)

“Satanism has always held a fascination for me. I grew up in the shadow of the satanic panic (of the 1980s). People used to talk about roving hordes of Satanists, as an enormous homicidal criminal cult. I think there were community meetings about it. Church groups were trying to ban heavy metal music and Dungeons & Dragons games — stuff that is outdated now. There was a real push to force people back into traditional, conservative values. People went to prison during that time on supernatural accusations! It was basically a witch-hunt. It turns out it was all based upon lies — a very egregious misrepresentation of Satanists. It was those lies that helped make the Satanists of today. It really had an effect on me, and made me pay attention to it. I was a kid, and it was horrifying.”  http://metrotimes.com/news/news-features/lucien-greaves-of-the-satanic-temple-1.1693438


Etat Critique: MEET THE SATANIC TEMPLE, A RELIGIOUS ORGANISATION WHOSE CAUSE IS EVERYTHING BUT FIENDISH (September 19, 2016)

“Obviously we play with misconceptions in such a way that will jar these people into, hopefully, reevaluating whether we’re really this sinister cult of homicidal maniacs, or if we’re having a laugh at their expense.

The most common misconceptions that are going to be applied to us are the misconceptions that are applied to Satanism in general, and that being that there is legitimacy to this idea that there are roving hordes of Satanists conspiring in the background with mobile crematoriums and inserting subliminal messages in music.” http://www.queerty.com/interview-satanic-temples-lucien-greaves-isnt-worried-about-arrest-feels-pretty-good-about-showing-off-his-genitalia-20130726

Salon: “It’s unacceptable to give religious privilege only to those who believe in the supernatural”: The Satanic Temple challenges the religious right (November 21, 2016) 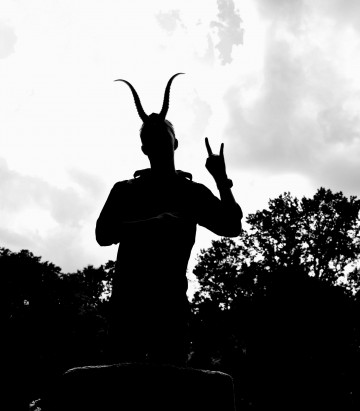 “It is our goal to separate religion from superstition. Religion can and should be a metaphorical narrative construct by which we give meaning and direction to our lives and works. Our religions should not require of us that we submit ourselves to unreason and untenable supernatural beliefs based on literal interpretations of fanciful tales. Non-believers have just as much right to religion—and any exemptions and privileges being part of a religion brings—as anybody else.”  http://www.vice.com/read/unmasking-lucien-greaves-aka-doug-mesner-leader-of-the-satanic-temple

Interfaith Radio: If a group called The Satanic Temple gets its way, visitors to the Oklahoma state house will soon be greeted by a 7-foot-tall monument that honors Satan. In December, the group applied for a spot right next to the other religious monument at the capital, a carving of the Ten Commandments added in 2012. It’s caused an uproar and sparked a national debate about whether it’s okay to put privately-funded religious monuments on public property. http://interfaithradio.org/Story_Details/A_Monument_to_Satan_in_the_Bible_Belt

The Satanic Temple is pushing forward with its plan to erect a statue dedicated to their goat-headed icon, Baphomet, beside the existing Ten Commandments monument in front of the statehouse of Oklahoma. Producer Abby Wendle of This Land Press brings us mixed reactions to the proposal from Oklahomans, and guest host Rebecca Makonnen spoke to Lucien Greaves, spokesperson for the Satanic Temple. http://www.cbc.ca/day6/blog/2014/05/15/oklahomas-baphomet-monument/

Weekly Constitutional: It’s controversial enough when someone wants to put a 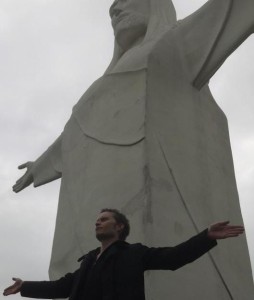 “there are individual cases in which that type of iconography [that of the worship of cruelty and misdeeds] was taken up by psychopathic individuals. I wrote about one such case, the case of Sean Sellers. And, of course, serial killer Richard Ramirez carved a pentagram in his hand before a court appearance. But both of these cases took place during the “Satanic Panic” and neither of them were working with a larger network, nor could they point to any satanic doctrine that motivated these works. They simply knew that they had become monsters. The framework of Satanism had been constructed for them by the anti-Satanists themselves. Of course, now I might point out all the psychotic killings “the Lord” inspired. I’ll spare you that….” http://www.nationaljournal.com/politics/satanists-war-on-the-war-on-halloween-20131031

“As homosexuals, pro-choice advocates, and others are ostracized by mainstream churches, more and more people conscientiously embrace Satanism as a metaphor for their rejection of oppressive religious cruelty […]” http://www.nationaljournal.com/politics/ted-cruz-criticized-abortion-protesters-for-chanting-hail-satan-this-satanist-is-offended-20140313

CNN: What Does Satan Mean to The Satanic Temple?